Transportation of people and goods through tubes, at high speed is not as farfetched as it sounds. With a speed of 482 km/h TUM Hyperloop is bringing this futuristic ambition closer to realization. 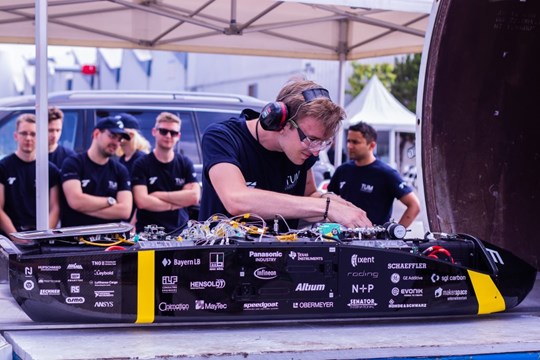 Road, sea, rail and air are the 4 traditional modes of transportation but sending people and goods in capsules through tubes is becoming an increasingly popular ambition and is expected to become the 5th mode of transportation.

The idea is at least 100 years old, but since Elon Musk and his engineers stopped to rethink the concept, gave it a cool name and showed in a white paper how it could be as fast as an airplane, more efficient than any other option and with initial investment costs comparable to highspeed railways, the race to turn “Hyperloop” into a reality began.

This summer, once again, the students of the Technical University of Munich (TUM) won the Hyperloop competition – the fourth win in a row. At a top speed of 482 km/h the TUM Hyperloop-team left all other teams in the international competition far behind.

The presentation will cover the general idea of Hyperloop, what is the SpaceX Hyperloop Competition, the ideas and technologies used in the newest prototype and what comes next."

All day on October 2nd, you can also meet and have a talk with TUM Hyperloop in the hall, where they will show fascinating videos and parts from the hyperloop.

Bio:
Rafael Naß de Andrade was born in São Paulo, Brazil and started studying Mechanical Engineering in the University of São Paulo. There he was the co-founder of the student group “Projeto Jupiter” (https://projetojupiter.wixsite.com/jupiter1), with whom he built and launched 3 experimental rockets. He moved to Munich to continue his studies in 2017 and started working in TUM Hyperloop (https://tumhyperloop.de/) in the propulsion subteam. He was in Los Angeles for the third SpaceX Hyperloop Competition (https://www.spacex.com/hyperloop) in 2018, which he and the grou won with the new speed record of 457km/h. In October he became one of the Teamleads of the group and they are working hard to get even better results in July this year.

Florian Janke did his bachelor’s degree in aerospace engineering at the TUM in 2016. During his studies he worked in the student group “WARR” and developed as part of the structure team an experimental cube-sat. Before his master he worked in one of Germany’s largest aerospace companies and was involved with the development of systems of the ExoMars rover. Since 2017 he is part of TUM Hyperloop and supported the team in different roles. This year he was responsible for the financial situation of the newly founded NEXT Prototyes e.V."

Obs! About Technomania:
Technomania is part of the bi-annual trade show, hi Expo, in Herning.
To participate in Technomania, you must register for the hi Expo. Tickets are free.

You get your free ticket directly at the hi Expo website.

Technomania is the place where IDA show top-level Danish technology, both in traditional and untraditional ways. At the event we focus on themes such as future technologies, Industry 4.0 and digitalization, and this year sustainability will be a theme as well. Basically, Technomania takes over one big hall in the middle of the hi Expo, and we fill it up with all the latest technology, 4 stages, start-ups, demo labs, games and a lot of other fun events.